ANOSR urges the Government to prioritize investments in education

During a meeting with Government’s representatives, ANOSR outlined the proposals for 2020’s Law of State Budget regarding the financing of higher education. We have also highlighted the defective activity of the University Ethics and Management Council (CEMU), which has carried out an audit within universities in the country but has not published any conclusion, nor recommendation yet.

On Sunday, 17th of November, on the International Students’ Day, the National Alliance of Student Organizations in Romania (ANOSR) together with the National Council of Highschool Students (CNE), has organised a Press Conference where there were launched the national reports regarding the implementation of the Code of Students’ Rights and Obligations (approved in 2012 by a Minister Order through ANOSR’s initiative) and, respectively, the School Students’ Statute (approved in 2016). These reports represent radiography of the public education system in Romania and recommendations for improving it, based on the conclusions that arise from students’ perspective. The content of ANOSR’s report is based on the analysis of public Higher Education Institutions own Codes of Students’ Rights and Obligations, together with the facts reported by local students’ representatives from the whole country. Therefore, ANOSR highlights that still, after 7 years from the adoption of this legal framework, there are universities in Romania that still have deficiencies in implementing it. Hence, the newly designated Minister of Education and Research in Romania that was present at the Press Conference, assured us that the ministry will take into account our conclusions and recommendations for HEIs in order to improve the education system.

During the first weekend of November, we have organised The Regional Representation Training, having sessions in 3 different regions of the country for all 80 participants. During these sessions, 80 participants have learned about the decision making bodies of universities, the financing of higher education at the national level and the basic principles of quality assurance. The knowledge gained will be applied in their own universities, as elected students’ representatives. 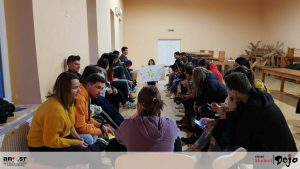 During the whole month of October, ANOSR has organised, with the active involvement of 700 volunteers from our local student unions and regional representatives of school students, a cleaning campaign within Bucharest and 10 different counties in Romania. This initiative, coordinated by ANOSR and supported by Act for Tomorrow – an environmental protection NGO, had the purpose of promoting civic and social responsibility in order to improve the quality of life in a sustainable way. Also, it should raise awareness among students of climate changes that the humankind might cause through little, but significant actions, with the medium and long-term goal of also making education institutions more eco-friendly.