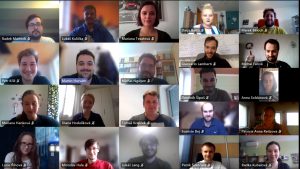 During the last meeting, the Student Chamber of HEIs (SK RVŠ) supported the statement of the Academic Senate of the Theatre Faculty of the Janáček Academy of Music and Performing Arts (AS DF JAMU) on the election of members for the Council of the Czech Television (ČT).

By the Council of ČT, the public applies its right to control the activities of ČT. The Council consists of 15 members elected by the Chamber of Deputies for 6 years, representing various regional, political, social, and cultural opinions. The primary role of the Council is to approve the budget and elect/dismiss the director of the ČT. Therefore, to sustain a democratic society, it is necessary its independence and resistance against any political pressures. In the coming days, four of its members will be elected.

The Academic Senate of the DF JAMU was the first academic senate in Czechia to highlight these facts. It appealed to the Chamber of Deputies to carefully consider the competencies and abilities of candidates for this position. Overall, the document contains mainly concerns about the possible weakening of the independence and viability of the public media, which are one of the pillars of a democratic society.

Moreover, SK RVŠ decided to support it, strengthened a resolution with an appeal to the Chamber of Deputies to sustain the independence of the ČT. The whole Council of HEIs subsequently endorsed the resolution.

Mr. Daniel Váňa, a current vice-chairman of the Council of ČT, was re-nominated for another six-year term by the University of Economics in Prague (VŠE). In 2018, when he was working at one of the faculties of VŠE as a press secretary, marked publicly students as unthinking and manipulated sheep since some students democratically expressed their opinion by petition against having lectures with Ministers from the Government under the leadership of Andrej Babiš, which was at that time in resignation. SK RVŠ fenced off by an open letter already in 2018. We still believe that it is crucial to have representative members of the academic environment in the Council of ČT. For this reason, SK RVŠ supports the petition by the representatives of the academic community of VŠE heading to the Rector with the request to withdraw the nomination of Daniel Váňa for the Council of ČT.

We will further continue to monitor the situation in the media in our country.