The right to education is not only the right to access. What’s behind?

At the European level, several political commitments to strengthen diversity and inclusiveness in higher education have been made throughout the past few years, starting with the Paris Declaration of EU member states in March 2015 on promoting citizenship and the common values of freedom, tolerance and non-discrimination through education. This is also reflected in the 2015 Yerevan Communiqué and the 2018 Paris Communique of the Bologna Process, in an attempt to strengthen the social dimension of higher education introduced as a concept in earlier Communiques.

It has become a high priority to ensure that no one is left behind in education, universities cannot be exclusive at a time when society is evolving fast into more globalised communities and awareness of different dimensions of diversity grows, be it cultural, gender, or sexual orientation. Furthermore, technological development, digitalisation and the use of artificial intelligence are impacting the way we live and work, increasing the need for new skills. A new report released by the European University Association describes how European institutions are engaging with widening access to Higher Education. The report presents a broad picture with data from 159 higher education institutions in 36 European systems. It shows different institutional strategies and measures and analyses success factors, challenges and needs for support to build institutional capacity. 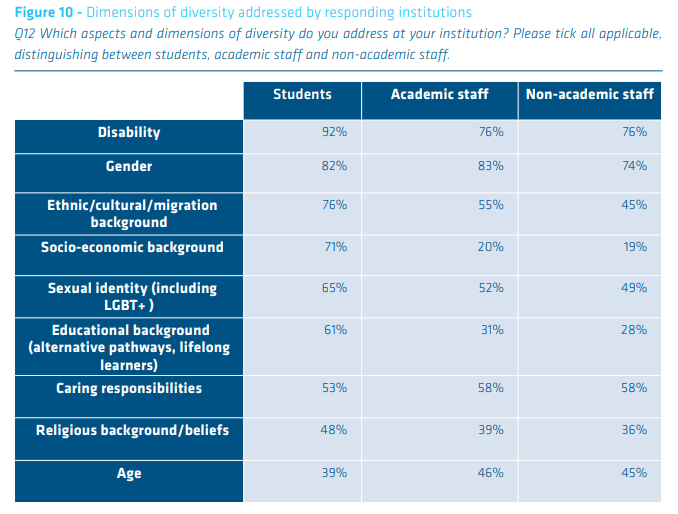 However, there is more work to do here to identify whether the commitments made in national policies to implement and increase access strategies and are put into practice taking into account the multitude of barriers towards active participation in Higher Education. In this regard, the European Students Union (ESU) reviews the implementation of these commitments with the Bologna with Student Eyes 2018 publication that gathers the perspectives of 44 National Student Unions from 38 European Higher Education Area countries with an emphasis on implementation of the agreed commitments, the social dimension and respect of fundamental values of the Bologna Process.

Similar to the EUA report, the most popular measures to increasing accessibility reported in BWSE 2018 was counselling, followed by additional financial support, social support groups and flexible learning paths. But the students’ unions claim that in most cases widening accessibility measures are not enough or are effective only in theory. More than half of the unions reported dissatisfaction with the dropout prevention measures throughout Europe.

It is of utmost importance to understand the reasons behind student dropout, therefore the lack of data on this problem creates an obstacle to creating solutions and putting in place effective measures. “The low number of countries utilising tracking of students is a particular concern. In some cases it is reported that no reasons for dropout are identified, as the capacity of the authorities to identify the causes is limited by very poor, or because of nonexistent data collection […] We stress again that incomplete or insufficient data can exaggerate certain problems, or hide other issues that may be the very basis of the problem.” (ESU, Bologna With Student Eyes 2015).

In the past three years nothing has changed in terms of the tracking of students to prevent their dropout, with answers from students indicating that, even more than before, especially after years of widespread economic crisis, the students that are left out of education and more likely to drop out, are those from poor socio-economic backgrounds; yet there is no substantial incremental change in the measures to support their inclusion and success.

The right to education is not only the right to access it but the right to fully participate in it and get the most out of it to fulfil one’s personal and professional development within society. Tailored measures are urgently needed to be put in place that addresses institutional and societal inequalities keeping individuals from underrepresented groups from accessing and completing higher education.

“Defining the skills and knowledge needed to try and make a difference in this area and equipping those across all levels in key stakeholder organisations with these things is crucial if a change is going to happen.” – Dr Graeme Atherton, director of the National Education Opportunities Network (NEON) in the United Kingdom.