Sinn Fein a political party in Ireland brought forward a Private Members Bill for debate in Leinster House. The bill (here) outlines that it would freeze rent for 3 years for new and existing tenancies.

Rent caps in Ireland are now seen by landlords as a target for which they can aspire to increase their rents by year on year. Many areas across the country are still not covered by rent pressure zones. A rent freeze is now essential to ensure that students aren’t extorted any more than they already are. Student accommodation in the main urban areas has reached exorbitantly expensive rates. Students cannot take further increases, 4% or otherwise, as it is becoming a huge barrier to students accessing education.

Currently in Ireland, students are forced to pay €3,000 for their student contribution fee, while rents are rising at a staggering rate [In Dublin, rent for purpose-built student accommodation costs over €800 per month]. The national student movement has deemed it unacceptable for the Government to expect students to be able to afford this, and have on countless occasions lobbied TD’s and Senators to alleviate these costs through the implementation of publicly funded higher education, building affordable accommodation and adequate rental protection legislation.

As part of the ongoing campaign to ‘Break the Barriers’ to higher education, the Union of Students in Ireland (USI) are highlighting the barriers that still remain for students as we head into this festive period. Many doors are still shut for students who are trying to access education, locking them out of their right to a third level education. This December, many students are trying to take any extra work they can get in order to get by to make the costs that attending college brings instead of focusing on their exams and assignments. 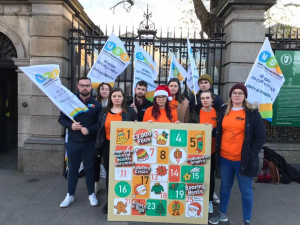 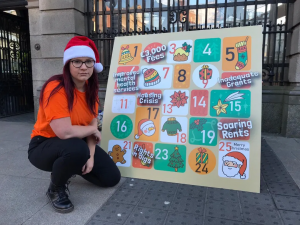 On Wednesday, 27th November, the Industrial Relations Bill to strengthen the Joint Labour Committee (JLC) system was brought before the Seanad. JLC’s are bargaining bodies in low wage sectors where the workers are insufficiently organised. Currently, JLCs set minimum conditions and rates of pay for low paid sectors of the workforce. However, there has been resistance by employers to the establishment of a JLC in the hotel and hospitality industries.

JLCs in this area would do a huge amount to ensure the sector that most students are working to get the opportunity to improve their pay and conditions while supporting themselves through college and beyond. This bill would provide for cases where organisations of employers or of workers fail or refuse to engage in consultation with the Labour Court. Unfortunately, the Bill did not pass but USI encourages students to look at joining a Union so they can look at better terms & conditions locally in their workplace.

On Tuesday 10th December, Sinn Fein brought a Private Members Bill for debate in Leinster House. The bill outlined that it would freeze rent for 3 years for new and existing tenancies. Rent caps in Ireland are now seen by landlords as a target for which they can aspire to increase their rents by year on year. Many areas across the country are still not covered by rent pressure zones. A rent freeze is now essential to ensure that students aren’t extorted any more than they already are. Student accommodation in the main urban areas has reached exorbitantly expensive rates. Students cannot take further increases, 4% or otherwise, as it is becoming a huge barrier to students accessing education. We are encouraged students to email/tweet their TDs asking them to support the bill.  has passed the second stage in the Dáil. The Bill has passed the second stage in the Dáil and it will now move onto the committee stage.

Response to Minister of State for Higher Education

At USIs National Council in IT Sligo the Minister of State for Higher Education Mary Mitchell O’Connor addressed members of National Council and took a number of questions from those present. Following on from the meeting, USI released an open letter to the Minister highlighting issues facing students in the third level.

USI is working with the European Movement Ireland and NUS USI to gather opinions of students across the island through a short survey.

USI launched a de-stress campaign to support students undergoing exams, the campaign included means in which students could support their own mental health along with study tips.

USI supported the School Climate Strikes that were taking place all across the country on Friday 29th November. We worked alongside Climate Action Groups and secondary school students who were leading the strikes in the lead up to the 20th on the promotion of local strikes and providing information on how third-level students could get involved with the strikes.

USI shared 24 Sustainable Tips during the month of December to inform and empower students to make more sustainable choices in their everyday lives. Tips included small steps such as ditching unnecessary appliances, lighting candles instead of turning on the light, layering up, adjusting the heating thermostat by one degree, or choosing a veggie option at mealtimes to help move towards a greener lifestyle.

Pink Training 2019, took place at NUI, Galway from Friday 29th November – Sunday 1st December. Pink Training is the largest LGBTI+ Student conference in Europe and it’s currently in its 27th year. The weekend saw 300 delegates from all over Ireland come together to participate in workshops and seminars about LGBT issues, rights and campaigns. The event aimed to empower LGBT students, inspire them to become leaders, provide a networking opportunity for students and safe spaces for students to come out, identify their own gender and sexuality and learn from others.#

On Friday the 29th of November, the Minister for Employment Affairs and Social Protection, Regina Doherty, T.D, published a report on the Review of the Gender Recognition Act. USI made a submission to the Review Group whereby a number of recommendations were outlined on how the government can make changes in legislation to protect and respect the rights of individuals who are going through a transitioning process.

Although, USI welcomed the changes that were announced we were also saddened and deeply disappointed that a number of key recommendations were not included in the report. The report failed to set arrangements for children aged under sixteen years, despite the increased levels of mental health problems for young trans people. Non-binary people were also overlooked in the report and denied the right to be included in the gender recognition act.

At Pink Training 2019, over 300 delegates joined us for a photo to express our disappointment with the report. 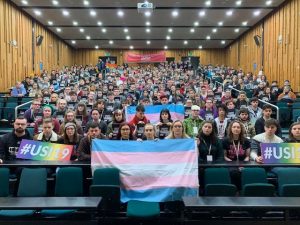 International Day of Persons with Disabilities

Tuesday 3rd December marked International Day of Disabled Persons. USI is committed to removing the stigma from all disabilities, challenging perceptions and encouraging all members of our society to take a positive attitude towards understanding the nature of the disability and overcoming prejudices, as well as working to create space for students with disabilities.

We are called for the widespread implementation of Universal Design for Learning, so that our learning environments embrace a diversity of learning. We called for an expansion of financial supports for students with disabilities. Our campuses are simply not accessible enough, and we must continue to challenge this and ensure that any new builds are fully disability proof. Significant barriers still exist for people with disabilities trying to access education, and USI will continue to lobby until they are removed.

Michael Chrichton Usiku is a first-year Carlow College student facing deportation due to an expired student visa. This visa expired as a result of a series of circumstances beyond his control. The Minister for Justice, therefore, issued a deportation order instructing him to leave the state by December 29th. USI joined CCSU, along with other organisations on Wednesday 18th December outside the Minister for Justice’s office. Michaels deportation was temporarily halted as the Minister is currently reviewing Michaels files. USI will continue to support CC Students’ Union in their efforts to stop the deportation of Michael.

Members of the Joint Oireachtas Committee on Equality and Justice launched a report on Direct Provision on Friday 13th December. USI recognised the committee’s work and welcomed recommendations to move away from institutional accommodation settings, move away from private companies profiting from Direct Provision, and provide more supports to asylum seekers. However, USI expressed our supreme disappointment at the complete lack of recommendations around third level education and contacted all members of the committee to request that the Committee reconsider the issues facing those trying to access education and make a further recommendation to this effect to the Department.

Significant barriers for asylum seekers include:

USI supported the International Day to end Violence against Sex Workers. Many students can turn to sex work for different reasons, not least the spiralling cost of rents and the extortionate level of fees we have in Ireland. USI supports sex worker rights and calls for a reform of our current laws.

Sex work was decriminalised in some circumstances in Ireland in 2017, but the current law as it stands criminalises sex workers who are working in groups of more than two. This puts sex workers in danger and recent spates of attacks and robberies on sex workers back this up. USI stood with sex workers and call on the Government to enact laws that will protect them in their work. 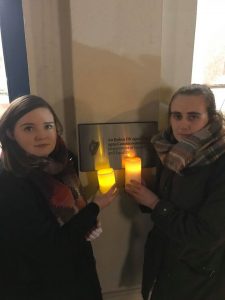 A petition of 12,000 signatures calling for an integrated education policy for the Irish language was presented by campaigners to the Minister for Education Joe McHugh in Dublin on Thursday December 12th. .The #Gaeilge4All campaign is seeking a comprehensive strategy spanning all stages of the education cycle from pre-school to third-level. The current approach to Irish language education is fragmented and does not meet the needs of those who are learning Irish in English-medium schools or of those who wish to avail of Irish-medium education.

It is very important that we have an overall Irish policy as it would show students that there is an actual road map in front of them when they are learning Irish and that they will have achieved a certain standard by the end of it. If that framework is there from the start it will be a lot easier for students to know where they are with their Irish. 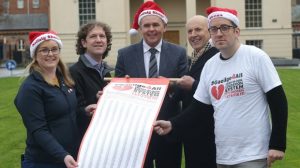 USI has established a Creative Network Exchange group which has been created to seek greater support and professional development opportunities for officers and students within Creative Arts Institutions. This group will collectively work towards the organisation and facilitation of an arts-related training/development event in the second semester.