A new project for the implementation of Bologna Process

BSWE FORward (Bologna with Stakeholders Eyes For a Stronger Future of the Bologna Process) is the new Erasmus+ project led by ESU from June 2020 until May 2022. The project is framed by the 2018 Bologna Implementation Report and Paris Communiqué and the well-known ESU’s Bologna with Student Eyes publications produced by surveying ESU’s national unions.

The overall goal is to update the latest version of Bologna with Students’ Eyes publication (2018), analysing the new scenario, requirements for education and training and implementing it from the students’ perspective in cooperation with stakeholders. Students across EHEA Countries still believe in the Bologna process reforms but it is necessary to provide a critical overview in order to bring more coherence to HE systems. The project intends to support external researchers, including technicians and experts required to analyze the information collected in assembling BWSE 2020.

The BWSE2020 will be the 8th publication and will present results, together with recommendations that will be written and discussed to allow countries to take further actions to make the implementation of the Bologna agreements more successful.

By involving other stakeholders and countries, this project allows cross-disciplinary and cross-border cooperation in order to enable higher education to fully play its role in meeting the challenges faced by our societies.

Peer-learning activities will be organised with the involvement of different actors that play a role within the Bologna Process (20-year crossroad) and discuss the problem areas and seek solutions beyond 2020.  A final conference, bringing together the experience of EU Institutions and Bodies, Ministries and Students will address the results of BWSE and the outcomes of the mutual learning to identify which topics require particular attention and present suggestions for a stronger future of the Process.

The European Higher Education Area (EHEA) and the Bologna Process are a voluntary process building an area with the use of common tools shaped as higher education reforms in order to foster mobility and employability.

The European Students’ Union has been reviewing the implementation of the Bologna Process since 2003 with the Bologna with Student Eyes (BSWE) publication in order to bring students’ voice to the Ministerial tables.

This publication explores the perception of implementation amongst ESU’s members operating in the EHEA countries and seeks to bring attention to the students’ priorities and recommendations for the future of the Bologna Process. 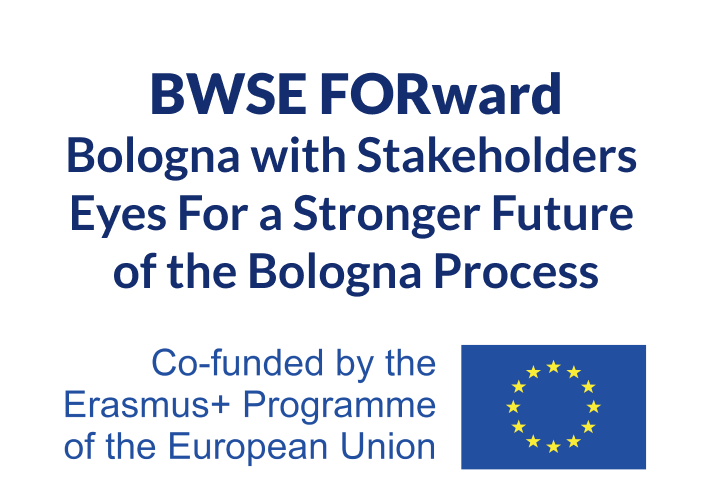