Enhancing the Student Contribution to Bologna ran from October 2008 to September 2010, the project aimed at increased student participation in education reform.

In the past few years, important steps have been made forward to the recognition of students as a key actor in higher education reform. As members of commissions on national reform such as the Bologna Follow-Up Group (BFUG) or quality assurance mechanisms, or also as members of governing boards of higher education institutions, students have proven to be an important factor in implementing real reforms on all levels. By integrating the student voice, the reforms have gained momentum and credibility, and increased in quality, as feedback from the classroom has increased. The ESCBI project aimed at using the experiences of students’ participation in this field, and building it out towards the future.

The project was co-financed with help from the European Commission’s Lifelong Learning Programme.

Concretely, the project aimed to:

As full stakeholders in the educational process, the participation of students the project considered it to be critical for the success of the Bologna reforms. By providing strategy development, capacity building and the furnishing of data, the ESCBI project ensured that student representatives across Europe were able to respond to the challenges posed by the 2008-10 period, by giving them the motivation and the tools necessary to carry out such tasks.

Furthermore, by analysing the overall reforms which were implemented in the light of the Bologna Process, the ‘Bologna at the Finish Line’ survey served as an invaluable tool for students and policy makers alike to continue the reform agenda beyond 2010 based on evidence of the successes and failures of initiatives, policies and methodologies embarked upon so far.

With the ESCBI project, ESU -along with its members – researched the effects of the Bologna Process on students, and analysed whether the implementation was a success. In 2009, a version of “Bologna With Student Eyes” was produced, which fed into the Louvain Ministerial Conference in April 2009. This document researched the impact of the Bologna Process between 2007 and 2009 from a students’ perspective. ESU was assisted by the Slovenian research centre CEPS to improve the methodology of data collection and enhance the accuracy of the findings of the publication. Before the Ministerial Conference, in April 2009, ESU hosted a European training event for national student representatives (of which a big part will attend the Ministerial summit), to discuss the results of the survey and the upcoming Ministerial Summit within the student population.

Based on the Bologna With Student Eyes, training materials were produced and used by the national unions of students organising the Bologna Information Days, a series of training events at the national level. This work fed into the 2010 Ministerial summit, which ESU co-hosted with Austria, Hungary and the European University Association (EUA). By bringing together East and West Europe, higher education institutions and students showed the true nature of the Bolgona Process and pushed for a rekindling of the pillars of the Bologna Process – an action agenda towards 2020.

In 2010, a special survey ‘Bologna at the Finish Line’ investigated the difference between the situation in 1999 and the current situation – how has the Bologna Process been a driver for change in this period of time? – complemented with a survey on the students’ views of the future of the Bologna Process.

ESU furthemore organised the European Students’ Summit in 2010 in Vienna, jointly with its Austrian member union, Osterreichische HochsulerInnenschaft (OH, Austria) and the BM56, which was co-organised by its Belgian member, Vlaamse Vereniging van Studenten (VVS, Belgium) also gave room for several seminars and meetings on enhancing the student contribution to the Bologna Process.

Finally, the ESCBI project empowered student participation in all areas of confluence between the Bologna Process and the EU Modernisation Agenda at a key junction in its development, thus ensuring a better implementation of the Process through informed and considered engagement by its actors.

What you need to know about rankings – Ellen Hazelkorn, Dublin Institute of Technology

Following the surveys in 2005 and 2007, ESU published its assessment of the implementation of the Bologna Process from a students’ perspective. The survey was based on a questionnaire, filled in by national unions of students in the Bologna member states. The questionnaire data was cross-referenced with other major surveys on the topic and research data that was available on the topic. Click on the title to access the publication. 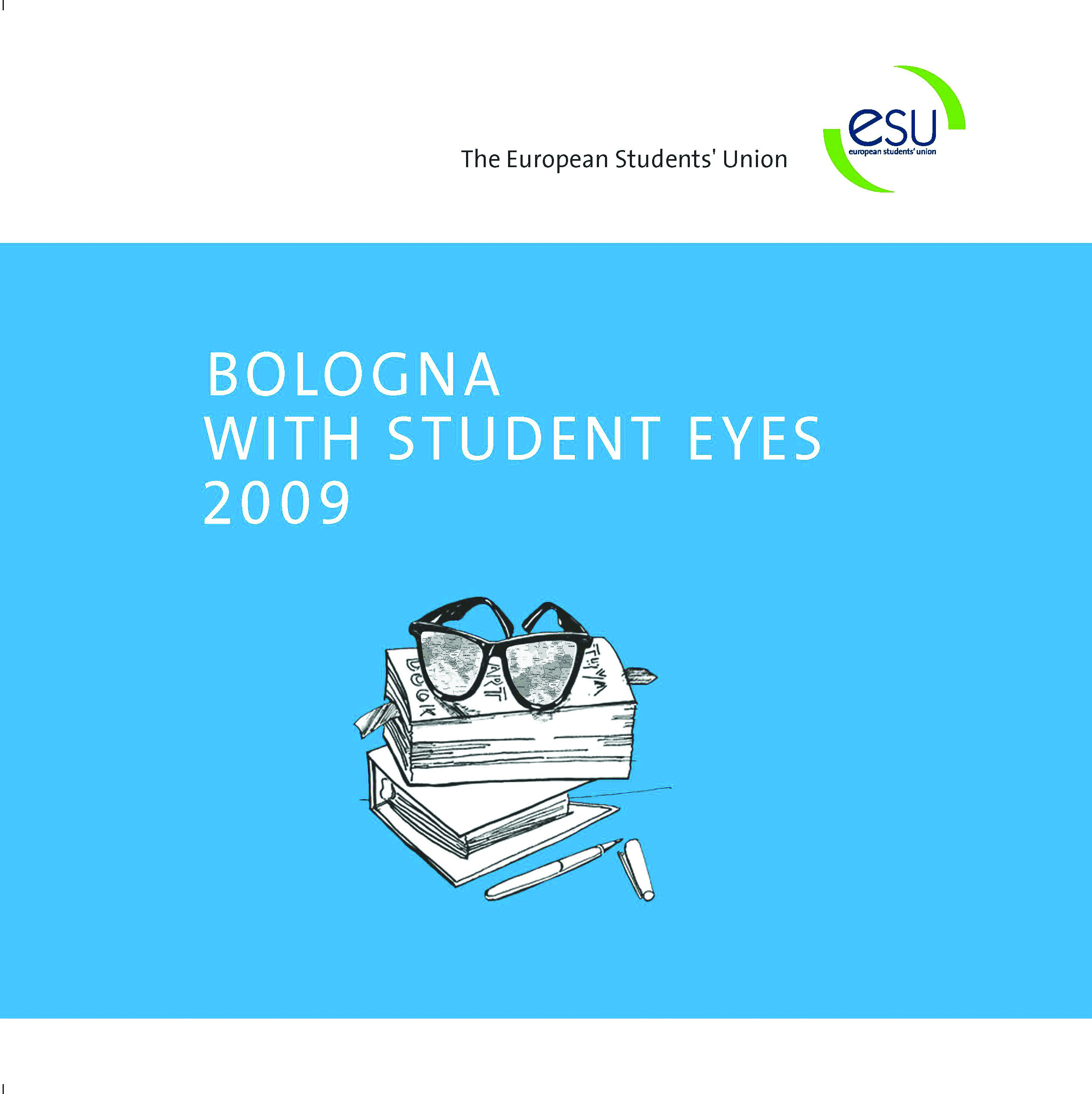 A reader for the conference was developed, with a compilation of relevant articles about the Bologna Process in 2010, an introduction of the main speakers, the plenary and workshop sessions.

Bologna At The Finish Line

At the European Student Summit in 2010, a publication was presented which included an analysis of the effects of the Bologna Process between 1999 and 2010. It was based on the previous editions from ESU of the Bologna With Student Eyes, complemented with a new survey on the student perspectives for the future developments of the Bologna Process as well as major data-sources developed on the topic such as the Trends survey and the official Bologna stocktaking. Click on the title to access the publication. 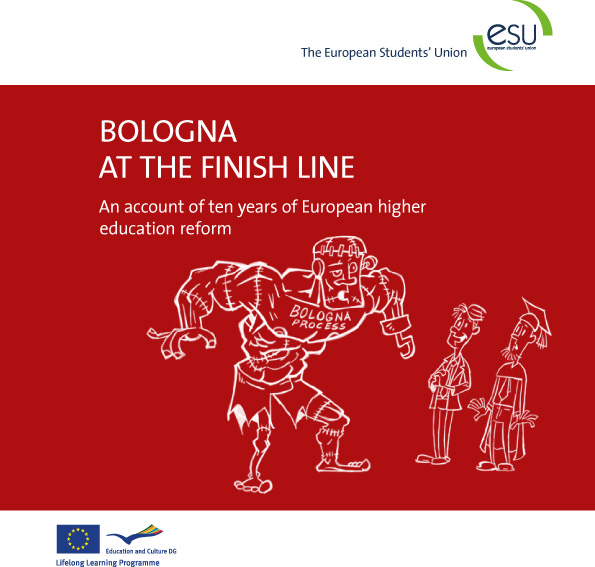 E-handbook ‘No student left out’  – The do’s and don’ts of student participation in higher education decision-making.

This handbook provides an overview of how a student union can successfully represent students in an inclusive way and how student participation in governance on all levels has grown throughout history. 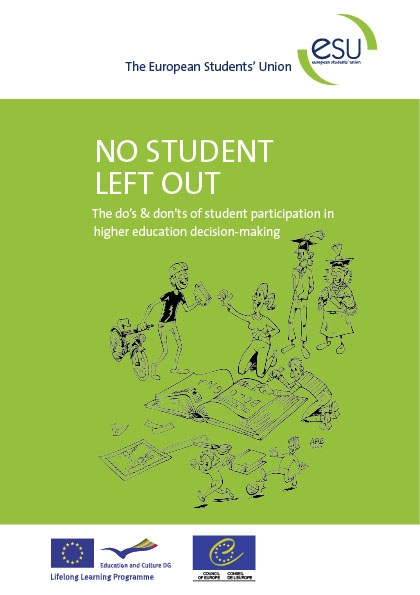 This part of the page is currently under construction.

The project was co-financed by the EACEA – Erasmus Programme